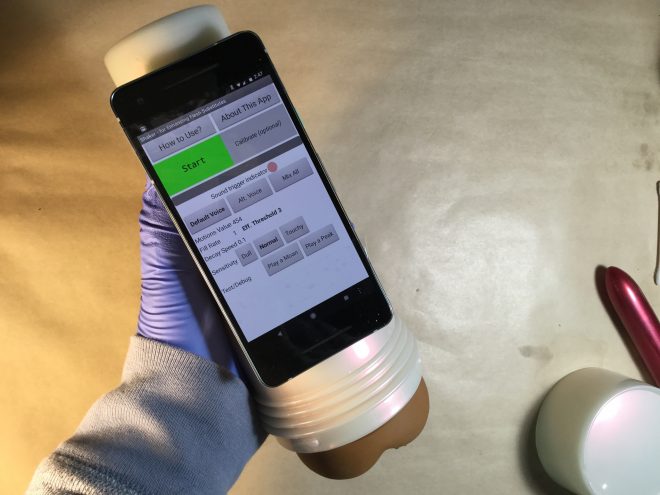 Some time ago I described an experiment in making a Fleshlight (or any other similar toy) make sounds in reaction to how it’s being used.

I got this idea because I personally really respond to audio, but it is no good to just play some sex sounds. There’s no sense of connection to the action.

But sex sounds that feel like they are in response to what I’m doing? That is profoundly different. That sense of feedback and connection flips some kind of switch in my brain, in a really good way.

There was a lot of interest in this idea when I shared it on Reddit. Turns out I am not the only one who finds the idea compelling. So here is a video demo.

This is currently just an experiment. There is nowhere to download it. (If there ever is, I’ll announce it here.)

Here are some details about what’s shown in that video:

As a result, it makes different sounds at the beginning (when nothing much has happened yet) than it does at the middle and end.

Sighs and moans are played at insertion, cries in delight with thrusts, and a climax triggers from sustained pounding.

The result is not much more than a tech demo, but it’s a very compelling effect and shows that there is potential here. So far as experiments go, it’s a success.

2 thoughts on “VIDEO: Making a Fleshlight Scream in Delight (Demo)”